Babo tries to be a tough little pervert, but sometimes he misses his friend, Big Toe 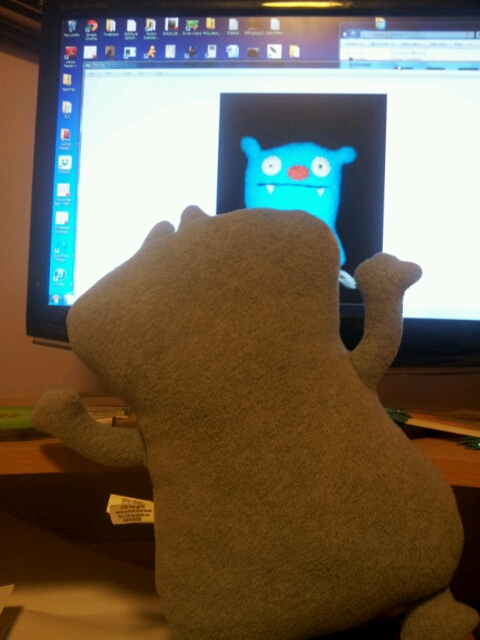 (Big Toe is off having adventures with and Pusheen.  You can even see some pictures in their 'journal)

We're seeing a lot of  foot traffic but not many patrons for the Aurora show, which is odd.  The poor girl who works for the show has been trying to get coffee for two hours and keeps getting thwarted.

lonelydumptruck and I went to see Monty Python (Almost) Live last night.  I was joking that the tickets were so expensive they had better include a floor show, but it was really fun.I'm not a huge Python fan overall.  I find some of their humor hit and miss, so I didn't immediately recognize everything in the show.  Some of the material was from their records, which I have never heard.  But I was also amusing myself with things like trying to read John Cleese's teleprompter.Because it was initially aired live there was still a half-hour intermission.  We used it to run across the parking lot to Table 6 for drinks and went back for act 2.

lonelydumptruck just downloaded a new Magic: The Gathering game on Xbox, so he played that when we got home.  I started watching The Strain.  I'm pretty intrigued so far.