I'm starting to feel silly updating about the tournament that happened a week ago but it's my 'journal, my first tournament and I want to remember it!

Friday Bro didn't have much of a plan for teaching the refs, since so many were coming from newer leagues and he figured it would be more beneficial for them to work on skating skills with the trainers brought in from out of State.  He told me to go join them too since I had paid for the boot camp.I joined the lower skills level group, of course.  Our instructor was Dirty Debbie Harry from a league in California.  She's a third-generation skating teacher and had some great insights.  ("...and you're thinking "There's something wrong with me!" "I'm too fat!"  "I'm to skinny!"  "I'm too awkward!"   Yes, there is something wrong with you!  You think it's okay to  hit girls!  You play derby!")  We did some awesome drills and she had some good trips for working on transitions (which I STILL suck at).  I couldn't/didn't want to really drill them, though, since my neck was sore and I didn't want to risk spraining it again.Saturday morning came early early early.  and Pusheen gave me a ride out to Palmer and picked me up in time to get ready for the show.  Because of the show, I could only ref from 8 to 3, and Bro worked my schedule figuring leaving early was my break, so I reffed my ASS OFF!  I was a jam ref in the first game, then outside pack ref for two games, then got to take off my sweaty, sweaty gear to NSO two games - one where I learned to score keep and one where I was a penalty timer for the first time in a year - then I was outside pack ref twice more and finished off the day with jam reffing a second time. Pooooooooped!!!!!In spite of the director's dire predictions that I was going to fall and break my everything, I skated well.  I had no rink snakes, though I did have three or so roller girl takedowns.  One of them, I put out my arm and tried to push her off course but she had more momentum. My favorite was the poor girl who came right at me, eyes gigantic,  yelling "Shit!  Shit!  Shit!  Shit!!"  I laughed all the way to the floor.I had a major fuck up my first time jam reffing.  I got all sorts of advice from Wookie and OMRefG (who just changed her name to Pandi Raider) about how to keep track of what blockers my jammer passed for scoring, I read up on all ths rules for star passes (when a jammer is caught in the pack, she can pass the helmet cover with the star to the pivot so the pivot can put it on and become the jammer), but it never occurred to me I'd have to remember who my original jammer was in case the pass went bad.  And one did.  The pass happened out of bounds (and I didn't see it.  Bro didn't know that and thought I messed up the legality of it).  Bro started yelling at me asking who my jammer was and I froze up trying to figure it out and didn't follow his directions to at least get the cover off the pivot.  One of the other refs got her to do it.  Everyone was very cool about it.  The ref who got the cover off laughed, patting me on the back, and said "Yeah, don't worry about MY voice!"I also learned that one of the teams that first game (and coincidentally they were one I jam reffed my last game) are points bullies.  Their jammers kept trying to signal to me or tell me how many points I should give them.  I had a feeling something was up early on when she looked me and held up three fingers. I looked right past her to my score keeper and signaled her proper score: 4.  But it got so bad out bench coach, who was just in the  audience, started yelling encouragement.  I thanked him afterwards and he ranted for most of my break about how they always do it and he wasn't just making sure I knew, he was telling all the score keepers, coaches and other refs.  I'll tell you though, my Ducklings and Swans, they never called an official review to contest points so I know I didn't do anything wrong.I sent girls to the box.  I skated hard.  I can't wait to do it again!

and The Coastie adopted Pusheen a bit ago.  She has been Ship's Kitty and having adventures there for a while, but came to Alaska to keep company while he packs and prepares to drive to Wisconsin.

Pusheen has also been preparing to be my understudy for the show in case I need one  and came with me to the theatre the other night.She had a sensible dinner first 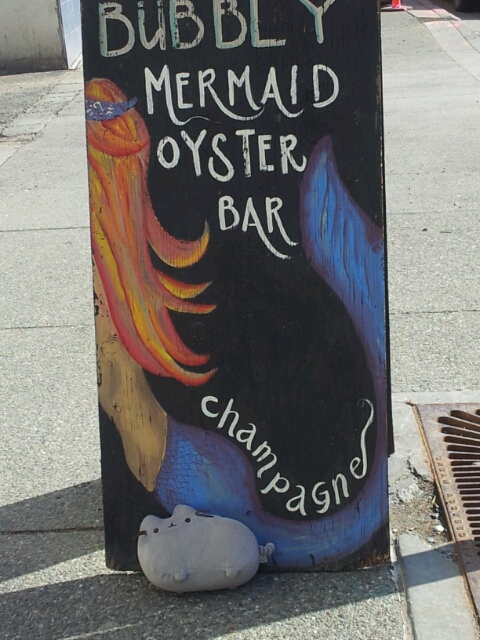 She spent a lot of time getting ready and hogged my eye shadow. 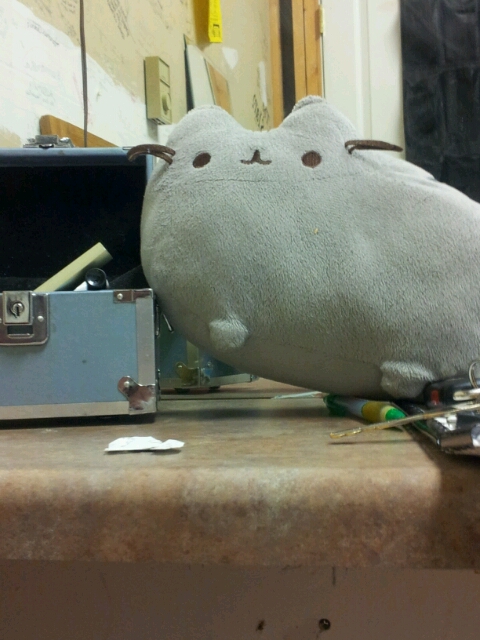 Oddly, I couldn't find my shirt when I was getting ready... 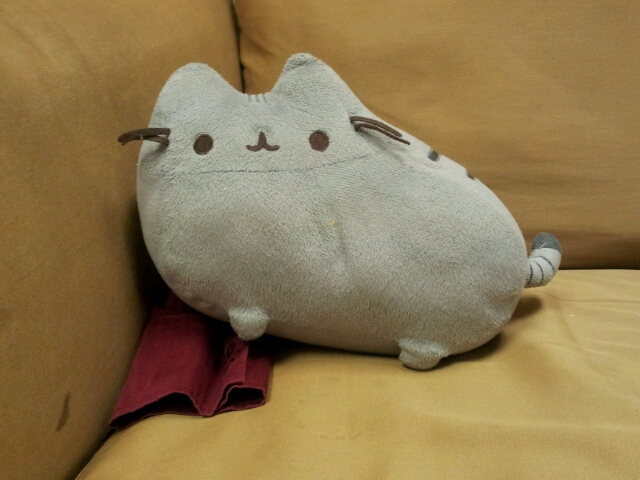 The show continues to go well.  Very small houses, but strong performances.  All of the reviews have been amazing.  We only had two people come last Sunday so we canceled the show, which was kind of nice since we'd been filming late Friday and Saturday nights.

We filmed last night too.  Tonight is supposed to be the last night of filming after the show, but we're missing a few big chunks, like three of the four monologues, so we might be in for a late night or need to do one more night.