This was probably the best birthday weekend I've ever had.

Frankie and I decided to combine birthdays (since mine was Friday and his is Wednesday)  and have a huge party on Saturday with tequila punch and lawn games.Thursday I House Managed an Aurora show.  It was really slow, but that was okay.  After work,

lonelydumptruck took me to Beartooth to try a few different tequilas and we shared some habenero chicken skewers and fries. I rented The Lego Movie on Wednesday, but we started it too late to watch in one go, so we finished that Thursday night.  I thought it was cute overall, but I just loved the ending.  I had no idea it was going to go there.Friday I took the day off from the Real Estate Office and spent the morning goofing off on-line, then met Mommie and

lonelydumptruck for lunch at the conveyor belt sushi place.  Mommie had never been there before and she loved it!  After that was errands errands errands!  I was thinking about going to see Godzilla at the theatrepub because, beer, but we had a lot of party prep to get done.   We stayed in and

lonelydumptruck  made me pistachio pralines and broke down the pork shoulder for grilling.  I made brown rice salad and helped with the pork marinade some, then we watched The Wolverine (which did not suck as bad as Wolverine: Origins, thank Zod).  We stayed up too late and drank too much and it was a lovely birthday.Saturday morning was all about set up and errands, but Saturday was the party!!  Holy shitballs, it was so much fun!  Kamala found a thing on Pintrest about s'mores cones (and she is all about s'mores, my ducklings and swans).  She brought over just about everything you could want to put in a waffle cone so guests could fill them up, wrap them in foil and put them on the grill to melt.  It started raining right at 6:00, but Frankie and Kamala set up two easy-up tents in the back so people could shelter there.   We had a giant jenga game set up under the carport and, best of all Beer Hunter in the back corner of the yard.  What is Beer Hunter, you ask?Well, you set up a target area and place on it several of the cheapest beers you can find.  Then you give your guests a BB Gun and have Frankie teach them how to shoot.   If you hit a can, you have to run down and drink it, otherwise known as "What You Kill, You Drink."So.  This happened: 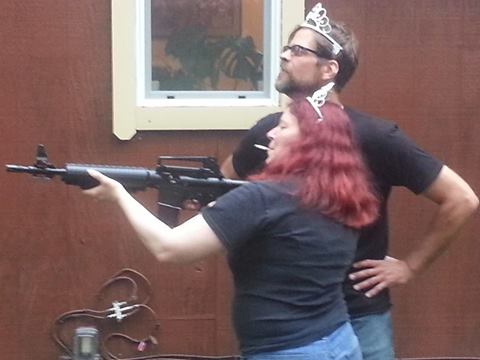 The whole night was great.  A huge group of our friends came and everyone brought food.  Within a couple hours people were stealing the cheesecake Patton B. Hinds brought so they could use it for waffle s'mores.  And it was so much fun watching the different social circles interact, like our neighbors came over and brought her mother with them.  Natalia has only been in the Country  since March and, as her son-in-law Justin put it, only speaks textbook English. I looked out the window and saw her in what appeared to be deep conversation with Barnacle Bill from the Ren Faire.  He is a large, grizzled, pirate-y/biker-y looking fellow, I know her command of English isn't strong but there they were, clearly interacting with completely focused body language.  I'm dying of curiosity, so I go out to see what they could possibly be taking about.They were playing jenga.Best birthday ever.