I fell off that posting wagon pretty hard, didn't l?  I gave myself permission to combine posting about Wednesday and Thursday last week because all we did Wednesday was make spaghetti pie and go see a new play from Perseverance Theatre at the PAC (it was a good show, very well acted, but I didn't think the script had as much snap as her last new play which they performed at Cyrano's this Fall).  Then Thursday got real eventful and I've just stayed pretty steadily busy and not quite able to carve enough time to write a good long update, but I will try to catch up over a few entries today.

It's feeling more like Summer is coming every day.  We have finally gained enough daylight that I'm no longer driving to and from work in the dark.  In about three weeks, when Spring Forward really kicks in it will start to get stupid, but between now and then is when the amount of daylight really makes sense and feels right to me.  It's getting warmer too.  We broke the all-time high temperature yesterday and it's supposed to stay warm like this all week.

lonelydumptruck and I walked to a new restaurant in our neighborhood last night to celebrate and we'll probably walk downtown to Hilary's birthday thing.We've had a couple social gatherings this week.  Long John Thomas came over last Friday to play Firefly with

lonelydumptruck made his famous mustard pork in the slow cooker, new method, and we kind of creamed them at the game.  We played a Big Job where you started by having to compete jobs from all but one of the contacts, then get two places first.  It was neck and neck for a while, but I had two items that kept letting me automatically pass challenges, so I actually won!  Tuesday and came over for dinner.  We made BBQ shrimp with the butter we saved from poaching the lobster.  They brought veg and made an impossibly decadent cake: 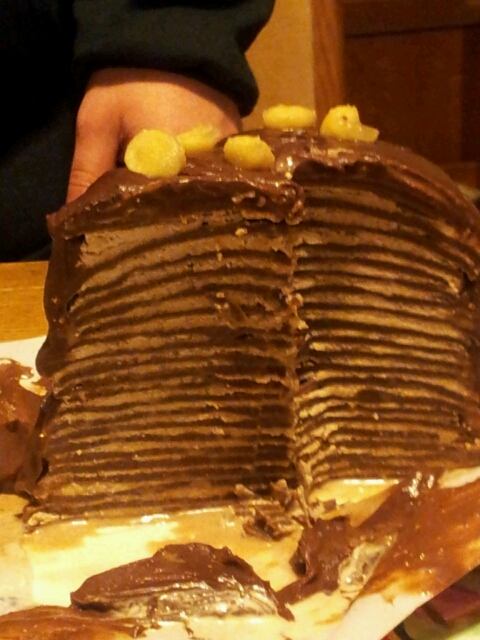 Can you believe that!?! After dinner we lolled around like large mammals and watched some Archer.  Wednesday, came to hang out and catch up on...Archer!  I hope this season lasts forever. found a new job at a downtown hotel and moved out of the guestroom just in time to make room for Gus and Pippi, Lori-O's cats.  They are such good cats, I love it when they come to stay, even with early morning teh starvenings! from Pippy.  So far their favorite thing has been lying on the envelopes for my real estate mail out and yard sailing them around the living room.